Homebrewing is a fascinating hobby – by combining a range of simple ingredients it’s possible to produce
fantastic beer!

Click here for some info on sterile filtration (note – I don’t really advise doing this, as it does alter the flavour)

I had the probe positioned mid way on the keg. The inkbird had the temperature set to 2.7C.

When I pulled a small amount of beer through a tap, it was reading 7.1C, despite the temp probe reading around 2.7C.

I’ve since moved the temp probe to the very bottom of the keg, and it’s now reading 6.9C. I also used ratchet straps to secure the sponges to the probe more securely than duct tape.

I’m 80% sure before, the temp probe now might not have been touching the liquid, but just co2 in the keg. The oscillations now are much less pronounced in my opinion. 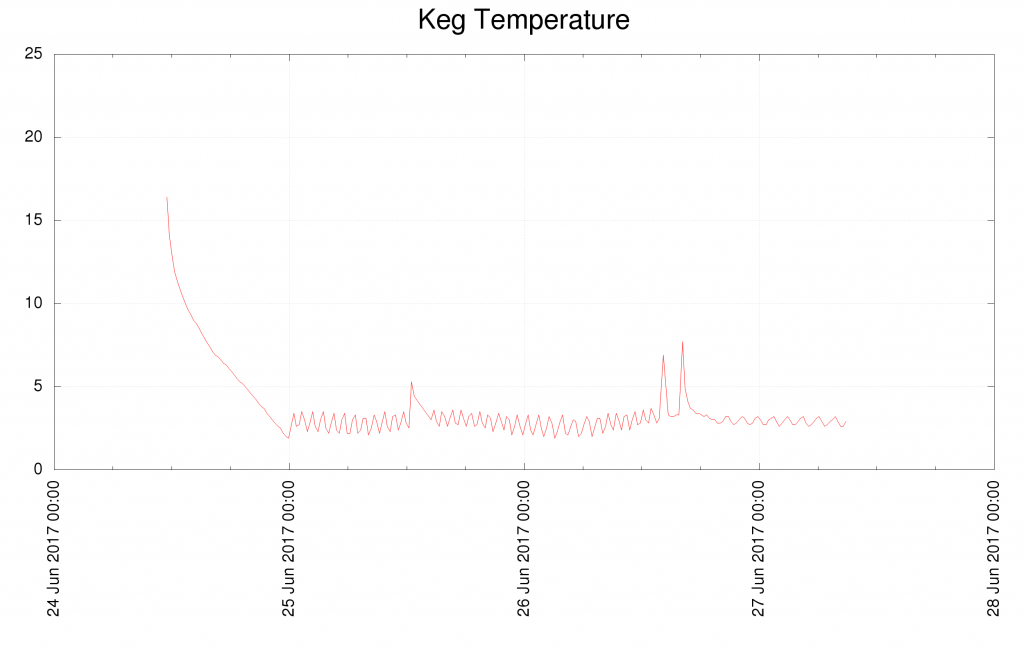 Click here for some pics of my assorted hop plants growing.

Fermentation temperature control with the Inkbird

Click here for an overview on how I setup fermentation control using
a beer chiller, SS coil and soil warming cable around the fermenter.

Playing with peltiers to try to control temperature

Click here for my attempt at trying to control fermentation temperature with 4 peltiers, which didn’t work. I think because the fan on the heatsink wasn’t powerful enough to cool the heat from 4 peltiers.

Click here for some pics of my basic three vessel setup.

Simple attempt at a digital hydrometer

Click here for my simple attempt at a digital hydrometer, using a time-of-flight sensor, to measure a hydrometer’s
displacement.

Things I need to start doing to improve my beer

Use SS LWD (low watt density) element for boiling – to try and reduce weird flavours. In the meantime though, with my kettle style element on JBK someone mentioned that if you continuously stir while the wort is getting up to boil, it will prevent the element going black and contributing to off flavours. I might try to use a pump to recirculate prior to the rolling boil, to do that for me. Also, clean element before/after each brew, possibly using a copper scrubber and citric acid.

Add calcium (which can apparently help with clarity), to take it to at least 50ppm

I need to leave my beer in the fermenter for at least 2 weeks, to help the yeast clean up properly.

I need to use fermentation temperature control! – Just starting to do this, hopefully the beer turns out well.

Measure the exact amount of water pumped through to the grain for mashing using a flow meter, so that the grain to water ratio is good.

Don’t let the sparged wort go below ~1.008 or you can get tannins

Brew In A Bag (BIAB) 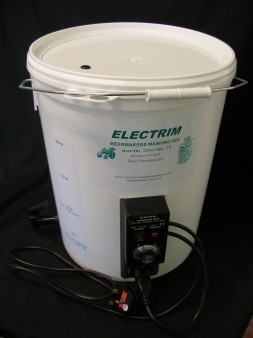 You simply fill the boiler with 5 gal water, and let it get up to around 71C (this is called the strike temperature), then switch it off. When you add the grain the temperature will drop to around 65C – the mashing temperature.

Then you put the grains in a bag, and put them in this water and leave them in the water for around an hour. Wrap the bucket in towels to help keep the bucket at the right temperature. (This is called mashing).

Then drain all the wort out, (the liquid from mixing water with the grain) into another bucket. As you want to collect 5 gal of liquid, (some of the water is absorbed by the grain) you do something called sparging, pouring more hot water (around 80C) onto the grains (leave this 80C water in the bucket with the grains for around 5mins) and then drain off into the bucket. You want to have collected ~5 gal of wort at the end of this.

After that, you turn off the boiler, and cool as quickly as possible.

Once the beer is around 25C you can add the yeast. 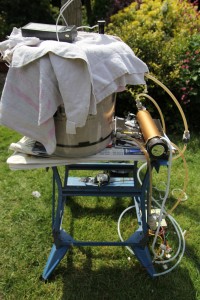 Recirculating Infusion Mash System is used in order to keep the wort in the mashing process at a fixed temperature.

In my system I make use of a pump, which is capable of around 11 litres / minute. I make use of an immersion heating tube, with a 3kW element inside (3kW is actually overkill, you’d only really need something like 1.5kW). In order to regulate the temperature of the wort, I made use a PID attached to the element and also a thermowell which is positioned at the end of the RIMS tube.

By using a recirculating system during the mashing process, the wort becomes very clear, as the wort is filtered through the grain bed. 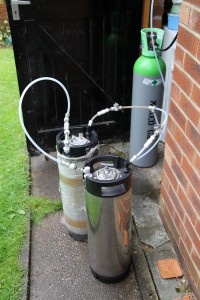 For homebrew beer a lot of people use something called a corney (Cornelius keg). These are especially easy to use, as they have a large lid which you can simply remove, to enable you to easily fill the beer.

There a two main gases used which are used in brewing carbon dioxide – which is the most generally used.

And also nitrogen – which tends to be used combined with carbon dioxide for kegged stouts such as Guinness. This is
known as mixed gas.

Corney kegs have two posts on the top, one for gas in, the other for liquid out. In order to use a gas tank you need to make use of a regulator. The regulator enables you to step-down the high pressure from the gas tank, to a more reasonable pressure for the beer.

There are two main types of regulator, one for mixed gas and the other type for pure CO2.

There are many experiments you can do involving yeast.

One such experiment I’ve done, involves splitting the 5 gallon batch of wort, into 5 separate containers. With each container you can ferment the beer, using a different yeast.

This gives you the opportunity to see how much of an effect the yeast has on the beer.

For instance a hefeweizen yeast will give a radically different flavor to your beer, than an english ale yeast.

You can simple add fermented beer to a french cafetiere along with a small amount of hops.
You can then press the hops through the beer using it, in order to quickly dry hop the beer. However I would like to compare the results to dry hopping by adding the hops to the keg, and then leaving for a week, as I’ve been told by leaving it for a while, the taste evolves. 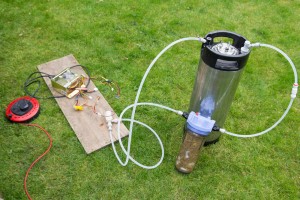